The 5th Annual Patio Palooza is being held Wednesday, September 17th at the Wharfside Patio Bar in Point Pleasant from 5-10 PM. The end of summer bash brings all the bands that rocked the patio bar stage – all for a good cause. This year, all proceeds from the event will go towards the St. Gregory’s Pantry of Point Pleasant, which is housed in St. Mary’s by the Sea, and is a community based, nonprofit emergency food bank, that serves the greater Point Pleasant area. END_OF_DOCUMENT_TOKEN_TO_BE_REPLACED

Editor’s Note: One year after Hurricane Sandy laid waste to countless businesses and homes across the eastern seaboard, we take a look back at those dramatic few days. For more, check out all of our Sandy Anniversarycoverage.

One year after Hurricane Sandy ravaged the Northeast, countless homes and businesses are still recovering.

After several days — and for some, several months — without power, heat and water, many business owners needed to face yet another hurdle: dealing with insurance companies to get their operations back up and running. And though some have fared better than others, their pain and losses are no less diminished.

On the anniversary of the devastating (and costly) hurricane, we’re still learning of the superstorm’s lasting impact on the communities left in its wake. Here are the striking recovery stories of three New York City-based entrepreneurs whose companies were devastated by Sandy:

Not being able to access his store in Manhattan’s Chelsea Market or service customers elsewhere in the city led to hundreds of thousands in lost inventory. But after a three-month renovation, the shop is back and bigger than ever.

Ian MacGregor is the CEO of The Lobster Place, a seafood supply company with a storefront in Manhattan’s tony Chelsea Market. The operation is the largest seafood market in the northeast, with a wholesale operation in the Bronx that caters to hundreds of fine restaurants, hotels and caterers in the metropolitan area. Sandy hit both operations in different ways.

Its retail storefront in Chelsea Market didn’t have storm-related damage to the structure itself, but was closed for about 10 days thanks it its location, which was effectively on lock down while the power and transit systems went down after the storm. Without electricity, MacGregor says about $100,000 worth of perishable inventory spoiled. Plus, people weren’t shopping.

And while The Lobster Place’s warehouse uptown also didn’t suffer a direct hit from the storm, it might as well have been shut down, as it couldn’t supply many of its clients, area restaurants and hotels shuttered by the storm. In total, The Lobster Place’s losses mounted to about $250,000. The insurance company paid out only a fraction of this loss, forcing MacGregor to reevaluate the future of his businesses.

“Never assume your insurance policy is a panacea for a big disaster,” says MacGregor, whose parents founded the company on the Upper West Side in 1974. “It’s really important to take the time to fully understand how your insurance dollars are mitigating risk.”

Despite its losses, The Lobster Place still managed to bounce back. In January, the Chelsea Market shop underwent a major three-month renovation adding 4,000 feet to its footprint. And within the last few months, MacGregor’s company opened Cull & Pistol, a sit-down seafood restaurant, also in Chelsea Market.

“Our emphasis remains to provide a product we can stand behind to both retail and commercial customers, to treat our vendors fairly and to value and recognize the contributions of our employees,” he says. “Natural disasters don’t change that.”

With names like The Water Club and The River Café, one would think dealing with the elements would be commonplace. But Sandy wasn’t an average storm.

The New York City dining institutions — one based on the edge of Manhattan’s waterfront and the other just under the Brooklyn Bridge — were founded by the same entrepreneur, Michael “Buzzy” O’Keeffe. He has long claimed to feel at home on the water and saw enormous success with both restaurants.

But since the storm surges caused water to both restaurants to flood, he has since been humbled. After a year of renovations, The Water Club only just reopened this month, while The River Café remains closed and may reopen by the year’s end. Industry veteran and lifelong New Yorker O’Keeffe notes that lessons learned from Sandy were tough ones.

“Don’t underestimate the power of a storm,” says O’Keeffe. “We were ready but this was a very hard storm, so even though we thought we were prepared, Hurricane Sandy became the new normal. For someone like me who’s been [living] on the water my whole life, Sandy’s high tide surpassed anything I’d seen.”

How will he stave off destruction from future storms? “We have kept our business model the same but learned to approach the physicality of our restaurants differently,” he says. “We worked everything to be hurricane- proof for the future… Everything is fireproof, waterproof, bacteria proof. If another storm hits we hope to hose everything off and open up again.”

After months of renovating, Jack Baker’s Lobster Shanty reopened in May, just before the busy season. Employees showed up to work after Sandy — not to wait tables or cook — but to gut the place.

With seven restaurants along New Jersey’s coastline and three additional locations in Florida, Chefs International knows a thing or two about natural disasters. Still, Sandy was like nothing Bob Cooper, the president of Chefs International, had ever seen before.

Over four feet of water flooded one of the company’s star restaurants: Jack Baker’s Lobster Shanty and adjoiningSunset Ballroom. The location lost inventory, property and equipment. And even the lobster tanks were totaled after the storm.

Coupled with the losses among local employees — homes, cars, their children’s bikes and toys, all washed away — and the impact hit even harder. “Every employee made themselves available regardless of what happened to them personally,” says Cooper’s assistant and longtime Chefs’ employee, Suzanne Kremp. “Most people who could show up to work did. But not to serve customers: They were there to rip out dry wall, tear up carpets, count destroyed inventory, take photos, scrub bathrooms, kitchens. It was an amazing effort on everyone’s behalf.”

Within six weeks, the company managed to refurbish the Sunset Ballroom, while the Lobster Shanty’s dining room reopened for business in May — just in time for the busy season.

“Our business was seriously impacted by the consequences of the storm,” says Kremp. “However, our job is to ensure we get things back in order as quickly as possible and to let everyone know that the Jersey Shore is, and will always be, a beautiful and fun family destination.” 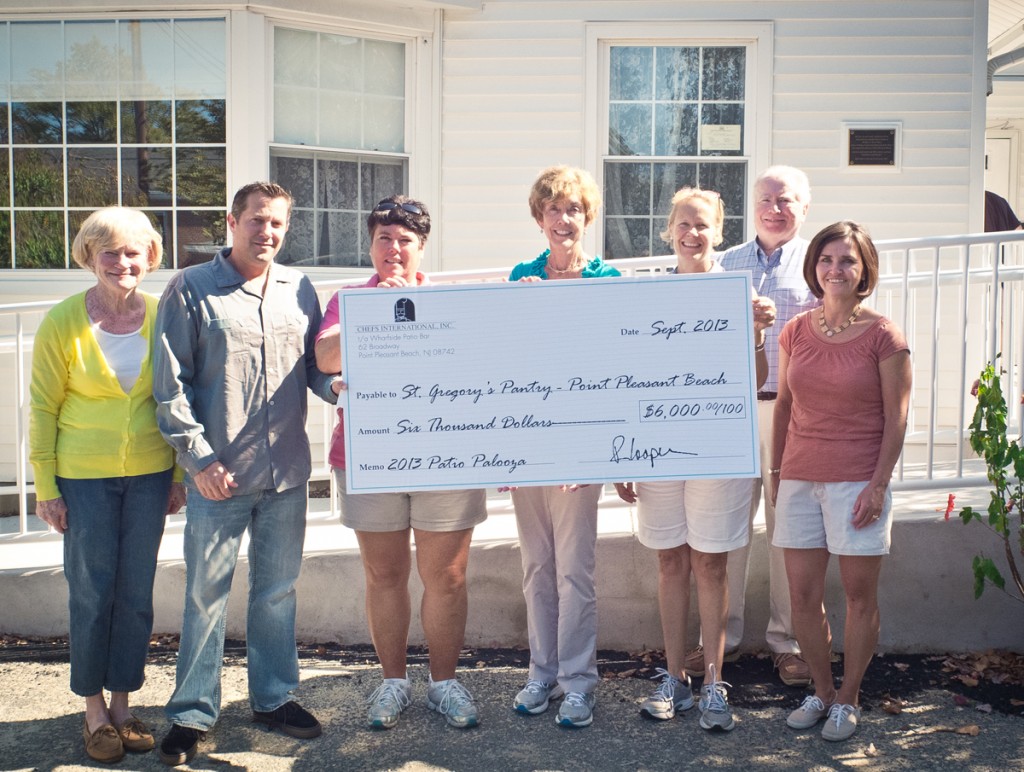 Superstorm Sandy left our entire area without power, and many with damaged homes. Immediately after the storm, St. Gregory’s Pantry in Point Pleasant was helping to feed the community during its most vulnerable stage. During the next few months they continued providing food and household items to those who normally wouldn’t find themselves in need of assistance. Our community depended on St. Gregory’s Pantry and they were there to help.

When it came time to plan Patio Palooza, an annual fundraising concert hosted by Chefs International and Mike Dalton at The Wharfside Patio Bar, it was a no-brainer that this year’s benefactor should be a local charity who aided the Sandy-ravaged community.

“We wanted to give back in a way that was like a repayment,” said Bob Cooper, President of Chefs International, “and we knew St. Gregory’s helped a lot of people for a lot of months in addition to the aid they provided on the regular.”

Patio Palooza 2013 featured over thirty local musicians who all donated their time to perform at the benefit. Miller Lite sponsored the event t-shirts. Donated Jets tickets and other items were raffled off. At the end of the event a portion of the proceeds from the evening’s drinks and food sales along with one-hundred percent of the proceeds from t-shirt, 50/50 and raffle sales went to St. Gregory’s Pantry.

“This was the fourth annual event and we are quite happy with the turnout. Everyone works so hard to help put it together and in the end we know it was well worth it. I’d like to thank everyone for their support and we look forward to continuing this tradition,” said Cooper. 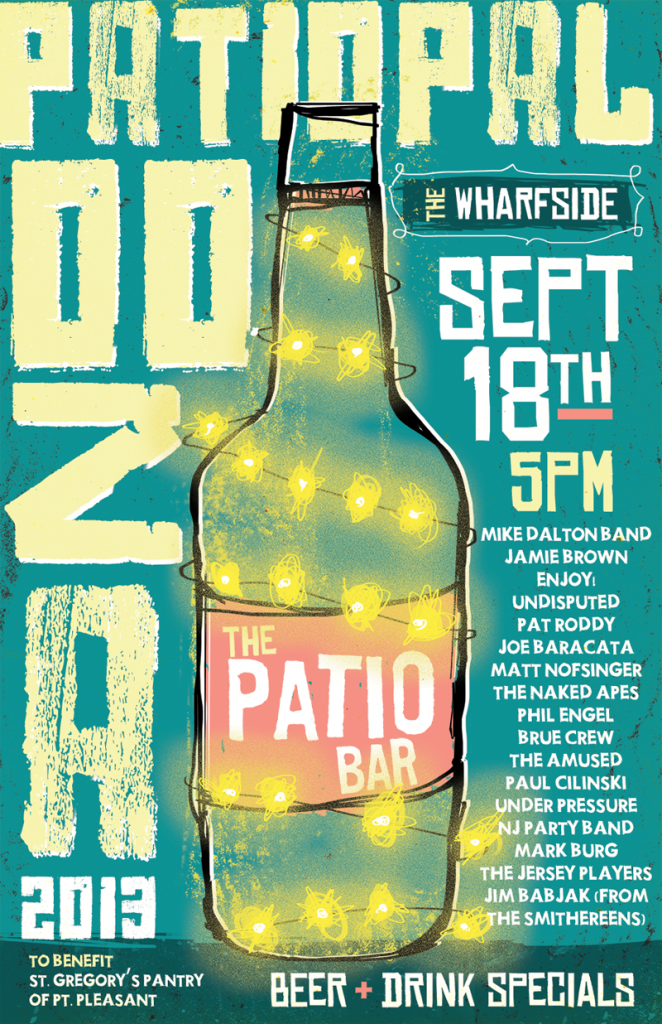 The 4th Annual Patio Palooza is being held next Wednesday September 18th at the Wharfside Patio Bar in Point Pleasant from 5-10 PM. The end of summer bash brings together the shores most popular bands – all for a good cause. This year, all proceeds from the event will go towards the St. Gregory’s Pantry of Point Pleasant, which is housed in St. Mary’s by the Sea , and is a community based, nonprofit emergency food bank, that serves the greater Point Pleasant area.

Just because the summer season is over doesn’t mean the bands and the fun have to end. “It’s a great opportunity to come out and have a good time while supporting an important cause,” explains Bob Cooper, President of Chef’s International, which operates the Wharfside restaurant.

“All the fan favorite bands that play here all summer come back and are nice enough to volunteer their time for the event,” adds Cooper. The bands scheduled to play this year include The Mike Dalton Band, Jamie Brown, Enjoy!, Undisputed, Pat Roddy, Joe Baracata, Matt Nofsinger, The Naked Apes, Phil Engel, Brue Crew, The Amused, Paul Cilinski, Under Pressure, NJ Party Band, Mark Burg, The Jersey Players, and Jim Babjak (from the Smithereens). “We started Patio Palooza in 2010. I’m happy to see that it has become such a popular annual event,” explains Mike Dalton, singer and guitarist for the Mike Dalton band, who helped form the event with the help of Cooper.
“The always popular commemorative t-shirts will be available and we will be having great beer and drink specials all night long. Come on down and celebrate another amazing summer,” Cooper adds. Last year Patio Palooza raised $7,000 for the Kennedy Krieger Institute. 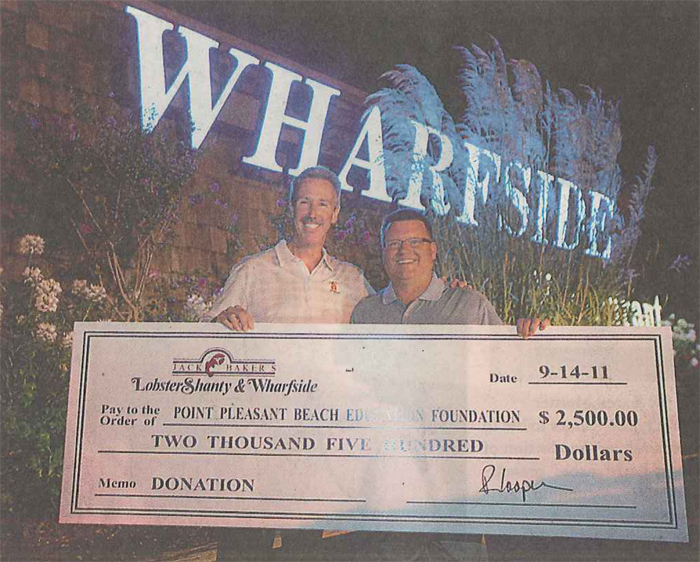