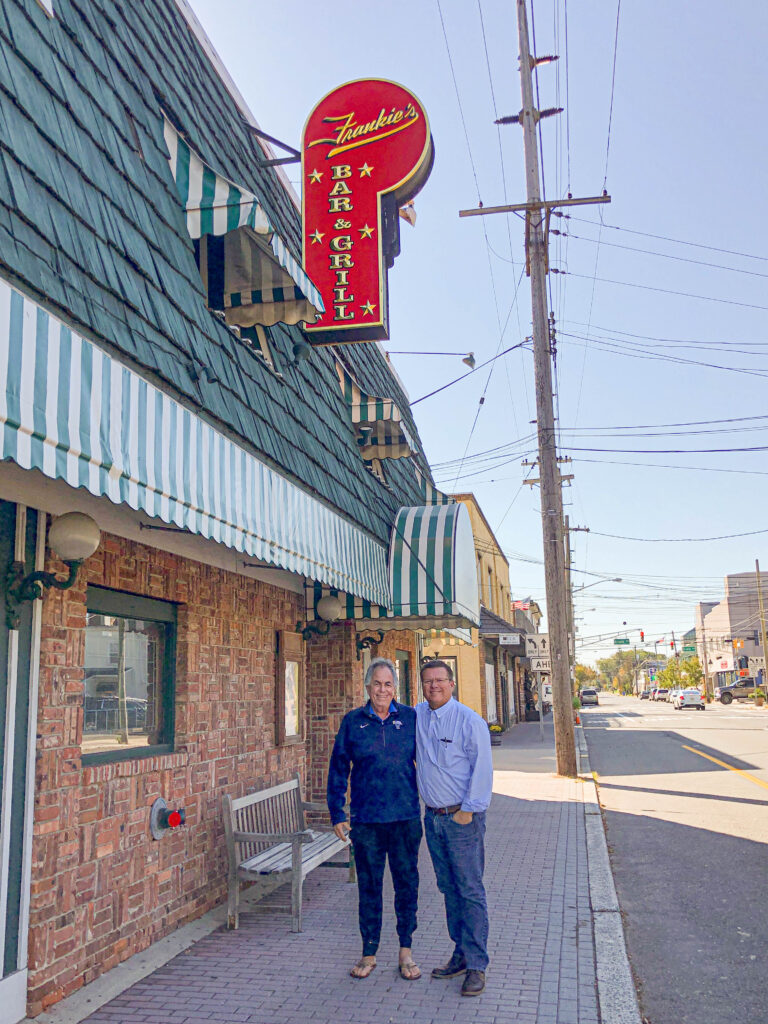 Frankie’s was previously owned and operated by Frank Kineavy since November,1985. Kineavy also owned Rod’s Tavern in Sea Girt, which was purchased by Chefs International in 2020 and has since been undergoing renovations.

Unlike Rod’s renovations, Frankie’s Bar & Grill will be closing only for a short time while Chefs awaits the liquor license transfer. In the meantime, Chefs will be focusing on cleaning, training, making minor repairs, to re-open the same Frankie’s that Point Pleasant Beach has known to love.

“Both Frankie’s and Rod’s became shore icons from the day they opened, especially with the locals,” says Bob Cooper, CEO of Chefs International.” “We’re proud to operate them under our umbrella because they both epitomize all we stand for: Great food at reasonable prices. Excellent service and friendly atmosphere, he adds.”

“Frankie’s was always the perfect meeting place for Point Pleasant Beach,” adds Kineavy. “Some of our employees have been here for over 25 years with me. I’ve always loved running it more than owning it—being with my customers. I know Bob and his team will give it the management it needs to live on in the community. As many offers as I’ve received in recent years it is a total compliment that Chefs has an interest in both establishments. I wouldn’t consider handing either over to anyone else but Bob.” He added.

Chefs International plans to re-open as soon as possible pending liquor license transfer. Updates for the re-opening will include cleaning, training, new dishware and table tops, minor repairs and adding additional staff. The Chefs team will be working closely with Frankie’s head chef Dennis Sullivan to bring back a pre-covid Frankie’s menu that highlights Frankie’s favorites including the signature 10 oz. hand-formed burger chargrilled behind the main bar. You will return to see your same favorite staff of whom are excited to be back. Chefs hopes to keep this favorite local hangout alive and give it the attention it needs to not only survive but thrive and remain a local landmark of the Point Pleasant Beach community.

“I’ve been a customer of Frankie’s since 1985. When I first met Frank to talk about Rod’s I didn’t realize Frankie’s would even be available—although I hoped it would. I had no intention of changing the name on either place. They are two iconic, well-run Jersey Shore establishments that were prominent front-runners in bringing great casual dining to the area,” says Cooper
“Since the onset of Covid-19 the restaurant business nationwide has changed dramatically. Operating during this time of uncertainty has been a great challenge. We hope to reintroduce the pre-covid menu items at Frankie’s that the local community knows and loves. Frank is our partner in both Sea Girt and Point Pleasant and we hope to have a long and fruitful relationship. We purchased these businesses because we love them. Chefs International is not a conglomerate—it is a small multi-concept restaurant group locally owned and operated out of Point Pleasant Beach with 13 total locations in Monmouth and Ocean counties. We’re not looking to be a national brand. Just like Frankie’s, each of our brands are individual Jersey Shore landmarks and that’s why we love them.” Chefs CEO Robert Cooper, concludes.

Have you ever wanted to dine in a tavern that George Washington visited during the Revolutionary War? Or maybe enjoy a pint at a bar that dates back to the era of the 13 colonies? Upon entering some of the oldest restaurants in NJ, it isn’t hard to feel as if you have been transported back in time.

Summertime in New Jersey can only mean one thing—beach bars are finally open! If you’ve ever been down the Shore, you know there’s nothing like a crisp, tropical drink after a long day of salty fun. Whether it’s for the soft sands or the fruity cocktails, these 10 Jersey Shore bars are certain to help every beachgoer and bar-hopper coast through the heat.

A typical conversation I have with my Mother…

My Mom: “Your father and I are going to Marina Grille.”

At this point, especially now that the weather is getting nicer, my parents eat at Marina Grille every other week. Not only my parents but Jersey Shore residents can’t get enough of this place. It’s the place to be! The food is good, the drinks are tasty and the views are phenomenal. This May will mark exactly four years since the grand opening of Marina Grille, which cost the borough of Belmar $6 million to build. When the contract was signed in 2017, Belmar expected to receive $24 million over the 50-year contract. After seeing a tremendous crowd and personally having a fun Friday night at Marina Grille, I think it’s safe to say that $24 million in 50 years is easily attainable.

“As you sit on the deck overlooking the Shark River, the setting sun backlights an armada of gleaming motor yachts you can admire without worrying about their upkeep—unless, that is, you have chosen to arrive by boat, as many do. With a big umbrella sheltering your table, nurse one of the signature Rum Bucket cocktails, polish off clams and oysters and move up the food chain to pizza, burgers, seared scallops or a rib eye.” – Eric Levin

Check out Episode 60 of “94 Seconds With Nicole” where Nicole S. Murray spoke with Bob Cooper, president of Chefs International to discuss how Chefs prepared for the reopening of outdoor dining.

Combining value prices and sizable portions, Escondido in Freehold, NJ, offers diners plenty of variety. The Mexican restaurant has been in the business for over 14 years perfecting its craft!

We recently stopped by the location, which is located on 402 West Main Street in West Freehold, NJ — adjacent to Moore’s Tavern and Sports Bar. For this latest visit, we tried out the following menu items below.

Borough officials joined restaurant staff and representatives from Chef International for a ribbon cutting ceremony on Tuesday just prior to the restaurant opening for lunch.

The borough on Tuesday unveiled the latest piece of its redevelopment plan with the opening of a $6 million restaurant overlooking the Shark River.